Where can you find the most famous cocktail bar on the Belgian Coast? 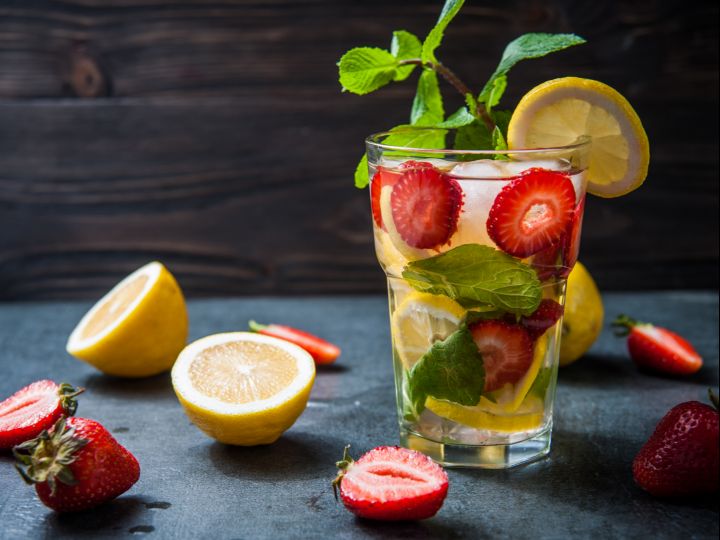 The most famous cocktail bar on the Belgian coast… and by extension Belgium? You will find it in a well-hidden place in Knokke. Solve the riddle in this article… and treat yourself to a mix previously drunk by Leonardo DiCaprio and Selma Hayek. © HANS HERMANS

But we start at the beginning. Because the world famous cocktails of cocktail bar The Pharmacy don't just arise. In a lab, Jan Van Attalle and his children experiment with the taste of hay and bones. Or they mix tequila with butter from the blood centrifuge. We visit Father familias Jan Van Accident in his creative lab.

"Wow, what a mouthfeel!" Jan Van Accalle's eyes speak volumes when tasting. The manager of the cocktail bar The Pharmacy and the head of the famous cocktail family Van Ongevalle thinks the yellowish buttertequila is a topper. On the other hand, the distilled light-molded barley and rye, prepared as they brew sake in Japan, still suffer. "That clarity. I like to work with that ", nods Van Ongevalle.

Forget the cocktail shaker with a lot of show from the YouTube movies. The Pharmacy mixes its most unique flavors in a lab. It fermentes and distils, sweeps ingredients in blood centrifuges and experiments with sound waves.

Under the creative designation of Jan and Ran Van Ongevalle, Maxime Willems's experimental laboratory trial produces firewaters with a very special taste. That of maple, for example, as a softer variety of oak barrels. The Bacardi swimming in maple flakes is artificially aged by means of sound waves. After three minutes, the drink tastes like it has matured in wooden barrels for several years. It is an example of innovation that trend watcher Tom Palmaerts likes to quote during speeches.

The focus on research and development makes The Pharmacy unique in Belgium. An innovation wave rages in the cocktail world. The more extreme, the more desirable. They are wanted, the trio father Jan, son Ran and daughter Hannah. They already shake cocktails for the actors Leonardo DiCaprio and Selma Hayek, for the F1 pilot Lewis Hamilton. The name Van Ongevalle equals exclusive, original and top quality.

"We have to keep the anecdotes for us", smiles Van Ongevalle. "Discretion is just as important at exclusive parties as developing and shaking customized cocktails."

One of their most extreme concepts was a psychiatry bar. The cocktail shakers and wait staff were dressed up as doctors and nurses. Guests received pills of absinthe and baxters with bloody mary.

Cocktail bar is hiding in Knokke ...

The family business from Knokke has only been active for five years. Father Jan Van Ongevalle started with cocktails in 2013. Looking out at his fashion business, he first traveled around the world, then devoted himself to the household, but could not resist the appeal of the catering industry. The former manager became a waiter, then bartender and started a cocktail bar a year and a half later.

The plan to open only three days a week did not last long. His daughter Hannah was immediately enthusiastic and joined in the case. When she was named the best bartender in Belgium a year later and she finished in the world competition, the father and daughter business got a boost.

Today The Pharmacy is open seven days a week during holidays and three or five days a week during the rest of the year. The atmosphere in the bar is quite like the American draining in the twenties. "The music in our anonymous building plays softly", says Van Ongevalle. "No windows and daylight. No coffee and beer. "

There are days when The Pharmacy is waiting for the first customers. Other days are busy. "Many customers make a serious detour, like the couple of Mexicans who took the taxi in Brussels to drink a cocktail," the business managers remember. The address must be sought by the cocktail enthusiast himself on the basis of the tip on the website: "Who is the legal owner of all the dolphins in England? Add 'lane' and 175 + 3 " .

Ran is the best cocktail shaker in the world

The business story does not stop now that they have created one of the hippest cocktail bars and brands in the world.

Son Ran and daughter Noa also joined the company (see box The cocktail family). The Pharmacy and the affiliated training center The Antique Shop turned 2016 into a gross margin of 193.627 euro with an operating profit of 48.522 euro. In 2017 they recorded 10 percent growth, as many as they expect for this year. The Pharmacy invests in an office building, training, consultancy, tastings and a show kitchen for recordings. Recently it has a first franchising in Mexico.

Every family member conducts consulting and events from his own company. "We are reinforcing each other", says Jan Van Ongevalle. "We look at who can create the most added value for the customer for each application."

Jan Van Ongevalle (53) founded The Pharmacy in 2013. He works for established brands such as Filliers and feels like a child in Disneyland when he is allowed to experiment for a day in the food lab Proef. He passes on his knowledge through The Antique Shop training center.

Hannah Van Ongevalle (30) was voted the best Belgian bartender in 2014 and reached the top twelve worldwide. She is the brand specialist of the family. She advises brands, has her cocktail program on the television channel Njam! and is a well-known media view.

Ran Van Ongevalle (26) reached the world press when he won the Bacardi Legacy Global Cocktail Competition at 2017, preparing the World Championship of cocktails. Now he travels around the world with his girlfriend Janah for a year. Looking for flavors, herbs and methods of preparation.

Noa Van Ongevalle (20) recently stepped into the business as the youngest daughter. She is behind the bar in The Pharmacy and runs the business a bit more in the background. Last summer she served summery and accessible cocktails in her cheerful summer bar Casa Clarita.

© This is an article fromFreelance journalist Hans Hermans written for magazine Trends and apartment-with-seaview.be